İtalya’nın 7 tepeli aşk şehri… Like Istanbul Roma is also placed on 7 hills. Italy’s biggest city and its capital city. Rome is such a crowded city that also has millions of tourist in every season. Due to this reason, in some reasons -especially in summer- there is no place in streets to walk easily. Also the best season to visit Italy is the spring season because of its mediterranean climate.

Roma is a city that you can not leave in 1 day. It is impossible for you to see all historical places and other, you need at least 3 days to walk around such a big city. Your every munite is so valuable when you are in a foreign country, especialy in such a big city like Rome you should be really well planned. If it is possible, you should prepare a travel plan before you leave your country/city in order not to face with any difficulties in Rome; I will try to give some information to you to prepare your list!

First of all you should give 1 full day to vatican. With its St. Peter’s Basilica, museum and all other stuff, Vatican deserves 1 full day. You can find the details of Vatican in our Vatican Guide, I will not write them all in this Rome Guide again.

First thing you should do is to have a city map (or print it before you leave your country). You can find your map In all restaurants or tourist information desks.

This map will make your trip easier if you dont have navigation. The other trick that I can tell you is Rome Pass. This Rome Pass makes you to use all the transportation free for 3 days with 2 free enterance to museums. The Price of the Rome Pass is 27€, If you calculate, it will be really advantageous for you for transportation and museum entrances. Also it makes to get in the museums directly from Rome Pass Gate without waiting the crowd. In this Rome Pass package, it also includes a city map and makes discount with the touristic red busses. (Another important notice is, this RomePass cant be used in Vatican, as you know Vatican is another Country.)

You have 2 choices to see the city, one of them is to walk the city by yourself like me, or you can choose the touristic red busses. You can find these red busses way through the Vatican, or the other stations is near the Train Station (Termini). The way you use these busses is like this; you buy a ticket for 1 day or 3 days as you choose, than you can get off in one destination, walk around, and you can get on another different red bus with you ticket. This usage is named hop on hop off! But I didn’t prefer this kind of transportation, I like to walk around the small tight streets to live the Rome’s soul inside of me. Also the local shops and brands can be seen in streets, and for me all the destinations can be walked one to each other, they are not far from each other. If you are energetic enough, you can choose this way…

So Let us start our tour, our first destination is Piazza Navona. The first thing that you can be interested in here is the Fountain of 4 River by Bernini and also ther are 2 more fountains which is called Moro And Neptunes. You can see a long stone which came from Egypt like in the middle of the Vatican. 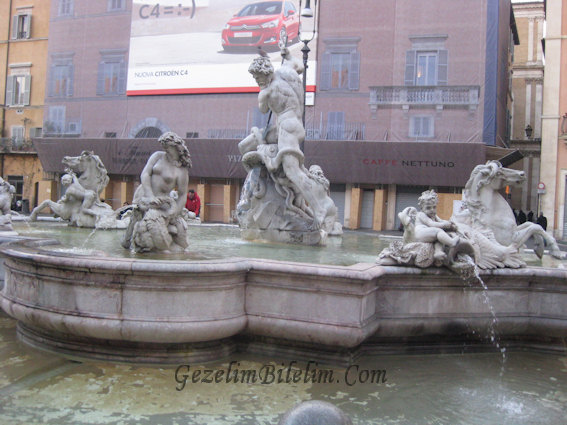 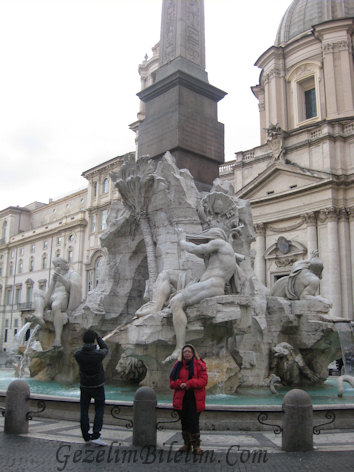 Video of Fountain of 4 Rivers

After This Square (Piazza Navona) by looking at your hand map, I suggest you to walk through Pantheon Temple. Pantheon Temple is not only the Romes but only Worlds one of the most popular Temples, which is well protected. It is an old Pagan Temple which is a really engineering marvel dome. This dome has a hole in the middle, Also some rumours said that this Temple is a huge gnomon. In Ancient years, Romans believes that the God sits on the clouds that why they used this hole in so many buildings to make god see them. Pantheon is also historically so important and it also has a big long stone near it which came from Egypt . If you wish, let us investigate Pantheon via pictures and videos. 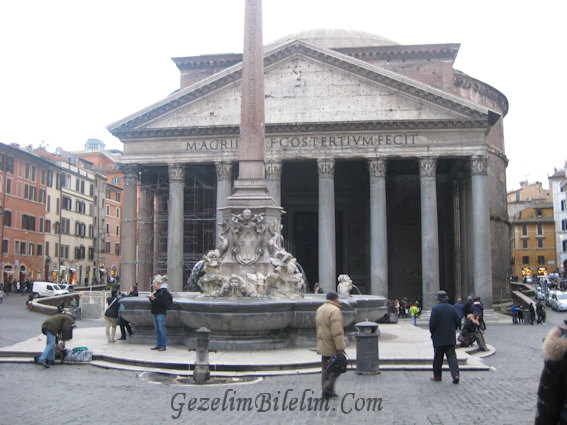 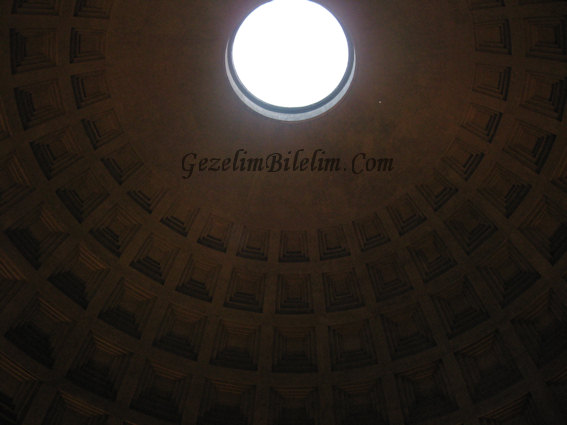 After finishing Pantheon there is a statue that the first and the unique statue which a groom gives his mother in law as a present. ( In my opinion it is the worst present ever to give your mother in law…) 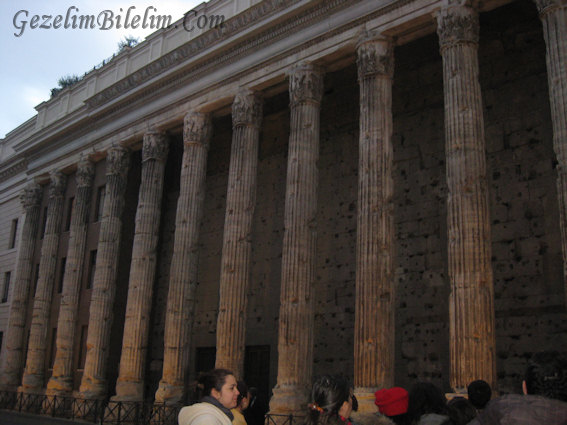 Let us continue, there is a main street Called Via Del Corse which has the shops of worlds famous brands. If you need something to wear, you can buy whatever you want from this street. If you will be hungry you can also eat something around here but be careful between 15:00 – 18:30 it would be difficult for you to find something to eat because of Siesta Time. After finishing this street if you walk through the upper part and than right you can face with the famous Spanish Steps. These steps is near the Spanish Square. You can see many teenagers and young people who are sitting to these steps from all over the world (the ones that sleep, drinking alcohol, sitting…) You can see a long Egytpian Stone also at the top of the steps… 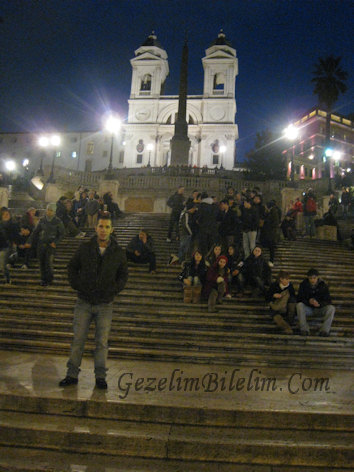 In rome your vital requirements will be water and toilets. In the city center of Rome, there is only 1 toilet unfortunately. Because of that Mc Donalds and Burger Kings toilets will be very helpful for you. But there will be long lines in front of these toilets especialy in ladies toilets.

For your water requirement you can first buy a bottle of water from market and then you can fulll fill it from the fountains of Rome, the water which comes from fountaines can be drinked in all parts of Rome.

After seeing the Spanish Steps, take Spanish Steps behind you and go to the left side and you can reach the most famous fontain “Fontana Di trevi”. For the tradition, you take the fontain to your backside and throw some coins on your shoulder, it makes your dreams come true. But you should throw two coins, one of them is to get back to Rome in future again, and the second is for your wish. 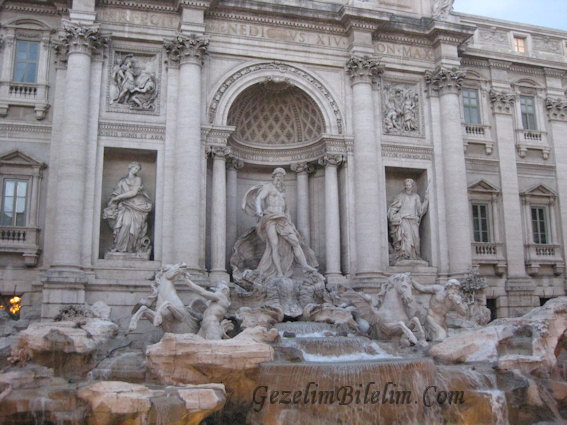 There is and old shoe shop near this fountain, you can but cheap shoes from there like 25€’s.Also there is a famous ice cream seller (Gelato) in there , you can taste any fruit based ice creams in here, prices are really cheap.

When you continue to your way, you will see the icon of the Italy the famous Collesseo (Collesium) which Spartacus had a chance to fight. You can see some holes at the outside of the Collesium due to the 1st World War. If you have Rome Pass you can get in for free without waiting the long line from the Rome Pass Gate, There is an important hisotry lying oon the sands of the Collesium. This Collesium is one of the Worlds 7 Wonders.

There is a tack near Collesium which names is Constantines Tack (you can see in my gallery at the end of the page). Just near the tack, there is a Roman Forum which is also so important for Romans History.

After finishing these, let us go through the 3rd longest river of the Italy , Tiber River. Tiber river cuts the Rome 2 sides, and here you can see the wedding cake nicknamed, Vittorio Emanuele II Monument. This Monument built in 1985 and given to II V. Emanuele by the U.K King This marble made gorgeous monument is placed near the Venezia Square (Piaza Venezia). 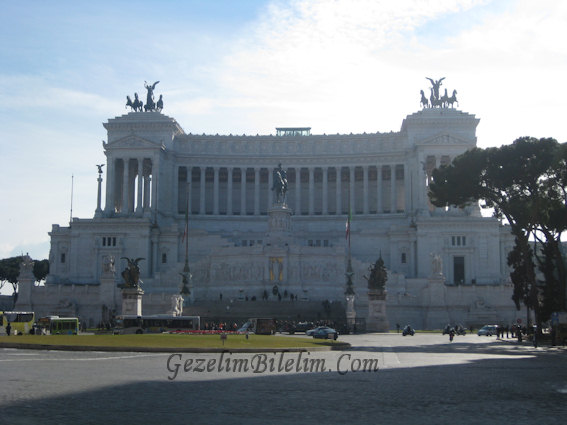 Have you ever heard of the movie Angels & Demons ? The big castle which can be also seen in this movie called Castel Angelo is also in there. This castle is used as a prison in middle age, and takes its name from the Angel which is stated on the roof. You can pass through the castle via angels bridge, and also Pope has a secret way to reach this castle in any dangerous situations. 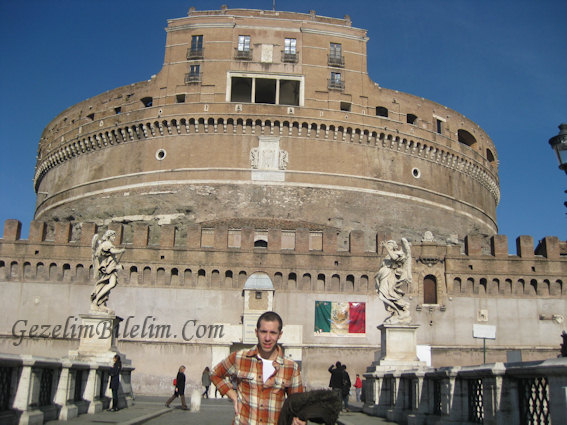 I tried to show you the one of the most famous monuments and statues, after this, walking around is up to your pleasure. Dont forget to visit the alleys.

Where to Stay at Rome?

Rome is a very good city to stay. There are so many hotels, hostels etc. I Prefer the Best Western Hotel Tor Vergata which is a bit outside of the city . Hotel was 4 star and really good but you need half an hour to reach the city center from this hotel. I Suggest you to choose the motels near Termini, they are also clean and has a good location. Staying near the city center saves your time and also you can go to the outlets which is outside of the city by busses which aparts from Termini.

How about Shopping in Rome?

Rome is kind of heaven for shopping. You may find all kind of shopping stores from famous to nonfamous ones. Plus you may find designs of famous desigsners such as D&G, Versace, Armani in Castel Romano outlet which is 50kmts far away from Rome.

You may find handmade shoes very cheap in front of Fontana Di Trevi.

How about food/ drink?

As in every Italian city you should chose for a meal Pizza which is most popular, paste, especially fettucini alfredo,wine, ice cream and cappucino. You need to remember, you can not find food in restaurants between 15:00 – 18:30 pm.
If you feel so hungary, then you should eat at Burger King or Mc Donald’s.

As all you know Serie A football teams are in Italy; leading of those teams are AC. Milan, Rome, Juventus, Lazio etc. Rome hosts world famous derbies in Stadio Olimpico stadium such as Istanbul. Capacity of this stadium may reach to 82.000 people. If you have chance, i suggest you to watch a derby in this stadium.